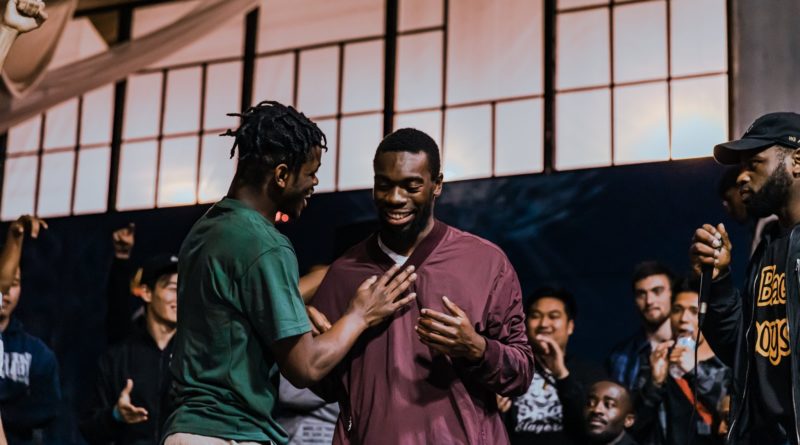 Today we wanted to talk to you about the winner of the EPIC JAM which took place last November 12 in London Gideon Mekwunye aka B-boy Gid Nasty who comes to us straight from Oakland California USA, he represents Oakland Originalz , Ace mob, Best Alive, Fallen Kingz and he’s one of the co-founders of the Make History Jam. We thank him for his precious time for the interview.

Hello Gid-Nasty, can you first tell us where your bboy name came from ?

My bboy name is Gid-Nasty, It came from a dance battle I was in while in my earlier stages we battled to the whole mix (20:17).

I later ran out of moves probably halfway through and just kept cocking my opponent for the rest of the mix, the next day my mentors called me Gidnasty 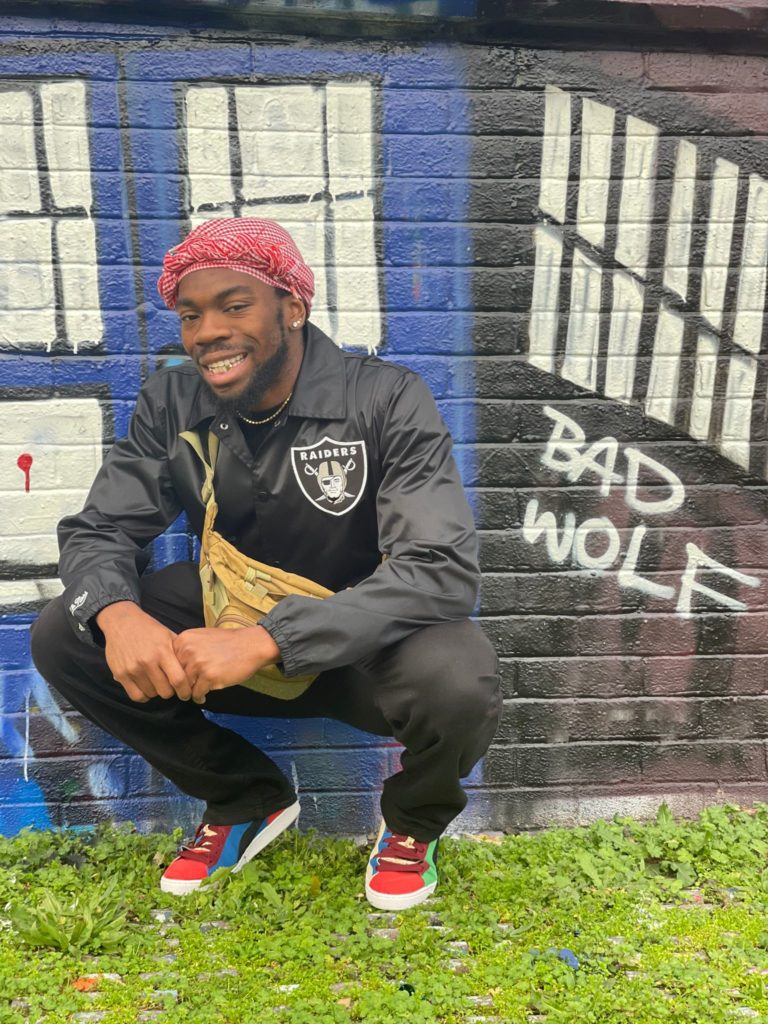 When & where did you start ?

I started in February 18th, 2009 in Oakland California at a middle school( grade 8) called Bret Harte

Why did you start breaking ?

I started breaking because I sucked at all the other sports available, yugioh cards got stolen , and even got kicked out the Lego club. Ironically two students came to me at the same time one offering a break after school program and the offering drugs, luckily I picked breaking.

My first teacher a Cambodian by the name of Vibol vann taught the foundations. I remember he said imagine dancing with a girl and I bit my lip , ever since then I loved breaking 😂

Who are your first influences ?

Was kind of poor in my younger days so I didn’t have internet until my sophomore year in High school, so my first influences were actually whoever was around me whatever said.

My first visual influences were the boogie brats
It was a Cd consisting of kmel,meagus, Mighty Mouse and more. It was given to me after I finished my first dance program.

Right now everyone I feel like the whole community is creating and unlocking this infinite amount of movement choice,capability, and speed.

Tell us a little bit more about your style, how could you define it?

My style looks more traditional I’ve been told. I think in this generation you need to have it all. You know if you go the competition route the winning rounds, moves that help you recover like the tap mill, or even the hand gestures before a power set eventually homogenize your style to where you’ll end up freezing or burning in similar ways and I feel like everyone evolves or changes parts of them bit my bit. One thing I noticed where I stand out is that I’m theatrical, like I notice things most would overlook and use it to my advantage. 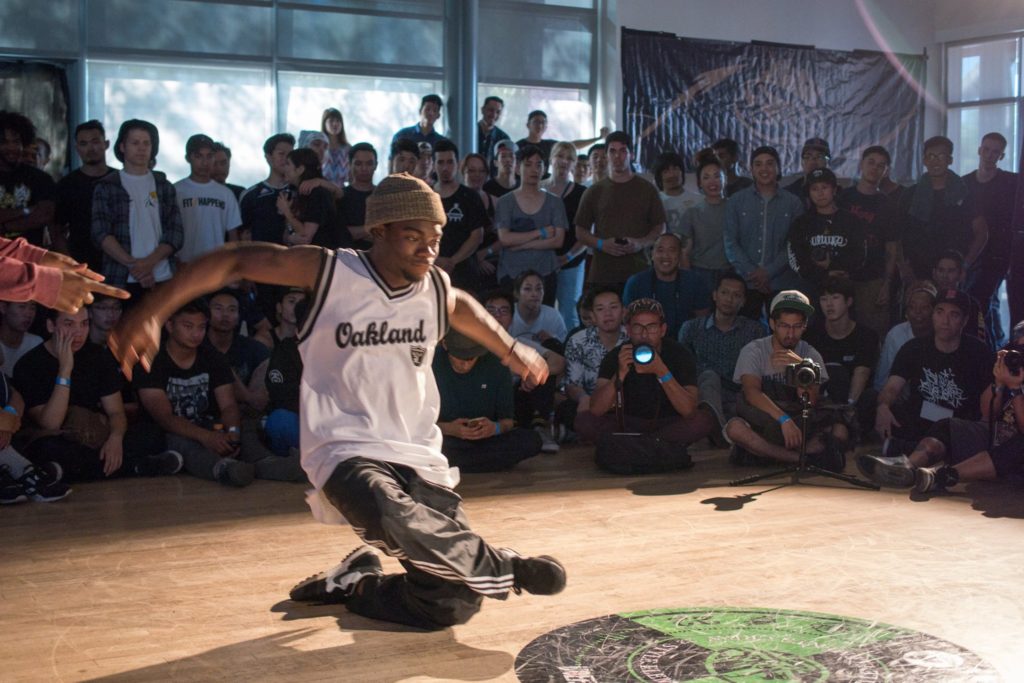 So I started ACE MOB, it’s an acronym for artistic creative energetic masters of breaking, originally was called squadron Ace because in my hood there were gang terms known as team click squad and mob And as a bboy I didn’t wanna use the word crew, So I came up with squadron (pros and cons of not having the internet).

I was playing a game Vietnamese card game called 13 or it was the card game war and the Ace was extremely strong, and the spades was the coolest, so I combined the two and made squadron Ace.

Overtime due to what I offered I later became the leader of it. Now it’s an Llc and we perform, teach, and battle, but mostly perform.

We started in 2016 Best Alive is an open styles crew consisting of members all across the world but primarily in Oakland. I entered a open style comp called turf inc 3 times in a row I won on the 3rd

The 2nd time I battled the leader of Best Alive I honestly thought I won by a inch but the judges had a different opinion i kept my head up high but I didn’t think the leaders wanted me in the crew I joined and learned more perspectives of the Oakland based dance style calling Turfing. 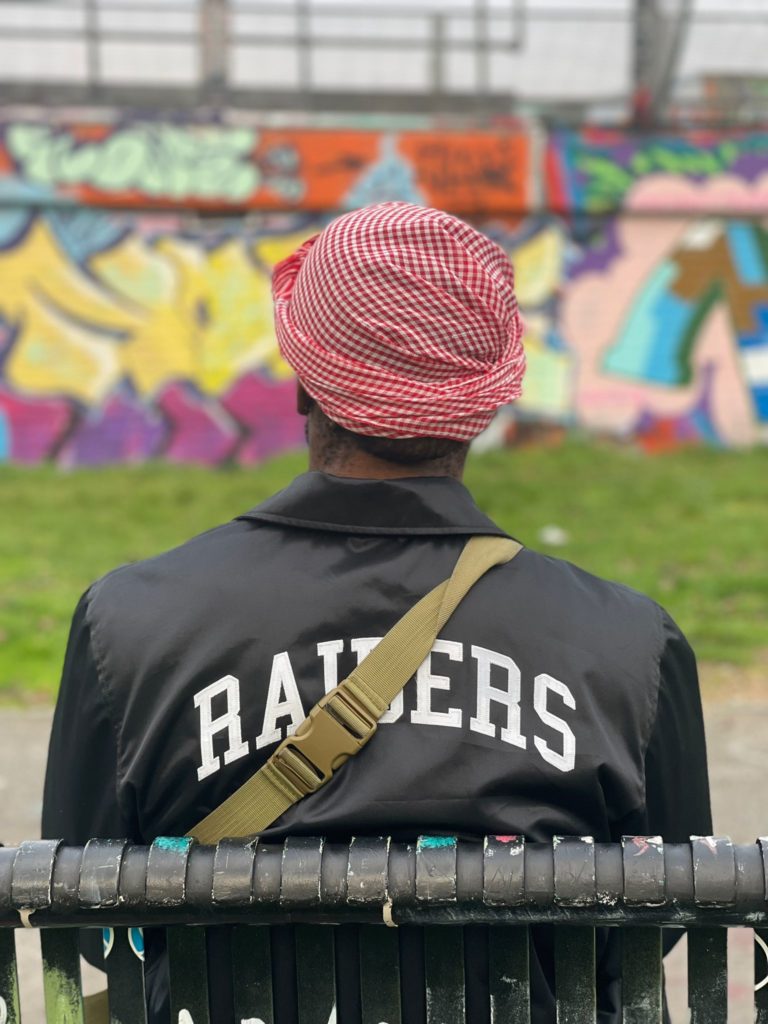 Fallen kingz is another crew I’m in.

Seeing how they drill projects sets and commandos is great homework for me.

Bboy Morris and Antix vouched for me and the whole crew had agreed and accepted me in open arms, Ace mob is my own it’s my family, Oakland originalz is for performing all across the world and the streets but with dignity and integrity

Best alive is to open my eyes and use other elements of movements breakers ignore or are blind to and work on being a better turfer it’s almost like mandatory to know how to turf if your from Oakland, kinda like a Nigerian not knowing of Afro beat like you have to know lol.

Study opponents judges old footage, they’re really in their books in order be the best they can be look for them I actually think of myself as one of the weaker ones as far as this mentality of discipline, I have talents but that discipline that I’m slowly learning

That is fallen kings, as far as getting into them 1 crew, unless your blessed usually doesn’t do it for a breaker

Do you Touch other elements of hip hop culture ?

I rap, Djay, and actually did graff in London which was dope. Can control is crazy, I also think that Graffiti is the toughest element cuz even just drawing the letter “I” I knew this can has chemicals I shouldn’t inhale so I can imagine a whole piece or spending 6-8 hours on a piece and someone draws over can you imagine the anger😂😂. Graffiti probably the only element that feel how grandmaster caz felt when sugar hill gang did that salty shit. 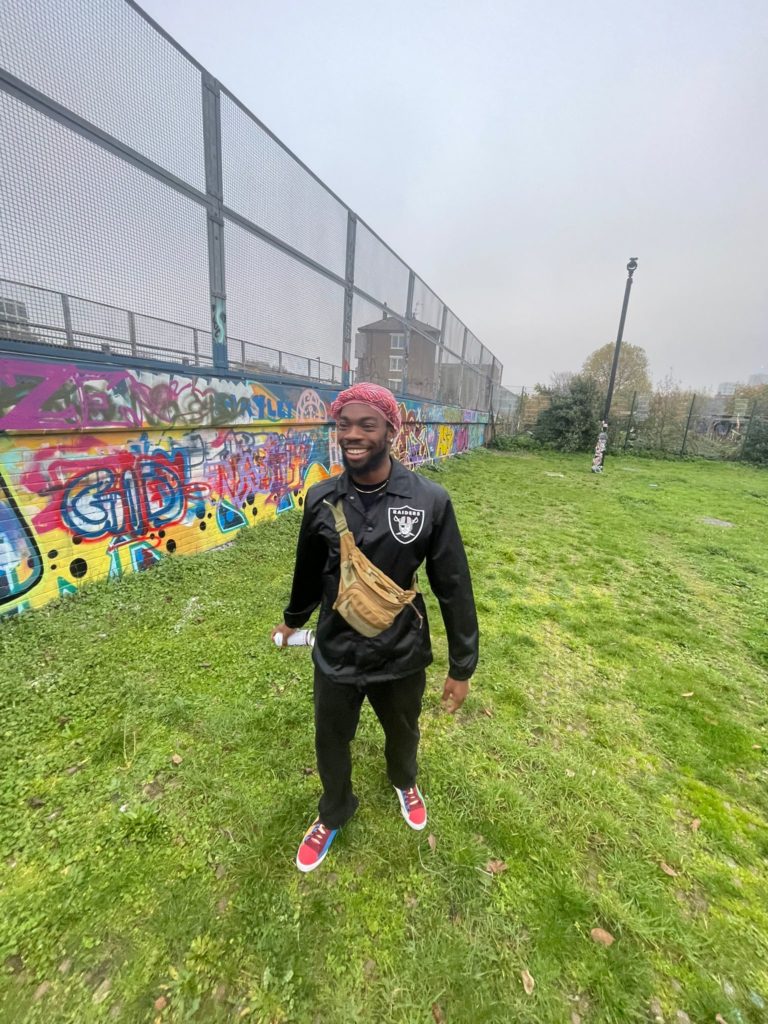 I know, that your Roots are from Nigeria, how is the breaking scene in Nigeria compare to US ?

The breaking scene in nigeria works harder but has a conservative mindset on what breaking is, but with more workshops and exposure to other dancers they’ll grow super fast. They recently have about 2-4 events in the year they can look forward to now, so in my opinion it reminds me of my California scene back in the 90’s.

You are one of Make History jam creator, tell us a little bit more about this project, When the Idea of creating it came to your mind and why ?

I think a lot of black breakers thought of this I was doing work in Ghana, teaching youth breaking and I came across web Dubois grave, he loved the concept of the spiders web to where everything connects and that’s when it hit me, what if I could get all black people in one setting and I was like well shit I’m in one of the blackest cities of them all, Oakland California.

The first person I told about it was boxwon I told him about it as soon as I came back from the trip (2017) I called my homie swirv because he said next time I do anything for children of the motherland and or children of the diaspora he wanted to be apart of it and there you have it we formed a team because he was planning on throwing the same thing ironically. I have an affinity with the month of February. One cuz it’s a short ass month, Two my moms birthday is the 1st of February, Three I started breaking in February, and Four I don’t know how black people got it or picked the month but they decided to give that month some melanin.
To this day I feel like that jam ended the world because Covid happened shortly after, by gods grace we got to throw one 2022 and we plan on throwing another one 2024

When it’s the next Make History Jam, and what you guys plan to do for the next one ?

3rd weekend of February, 2024
Open styles
Breaking
And a pot luck type vibe on the Sunday, but I need to organize and market the whole thing I’ve been lacking

What’s the main difference for you between Jams and bboy/bgirl compétition ?

Damn America must be fucked, I thought it was the same 😂😂😂🤷🏾‍♀️. Ok the difference should be the vibe to where the prize is/isn’t the focus

I know squadron threw a jam of invites only, that shit was dope but it was like a high class jam like I can’t describe it they like picked the best duos they personally could think of and had all of them in one room

Your Top 5 best music for dancing ?

Some song from idk but here’s the song title

( a dope producer named knxwledge , I love his shit )

What are your favorite shoes to break ?

What’s your next jam ?

Weird euro locations I shouldn’t be at unless people knew me like Scotland, Australia, I’m down lol, anywhere lol.

Any bboys/bgirls with who you would like to exchange on the floor ?

Throwing a jam in Nigeria 2024, It’ll be a busy year for me for sure

What can we wish you for the future ?

Bc one champion, Olympic winner, and whatever big platform we got that shows who’s the best out there 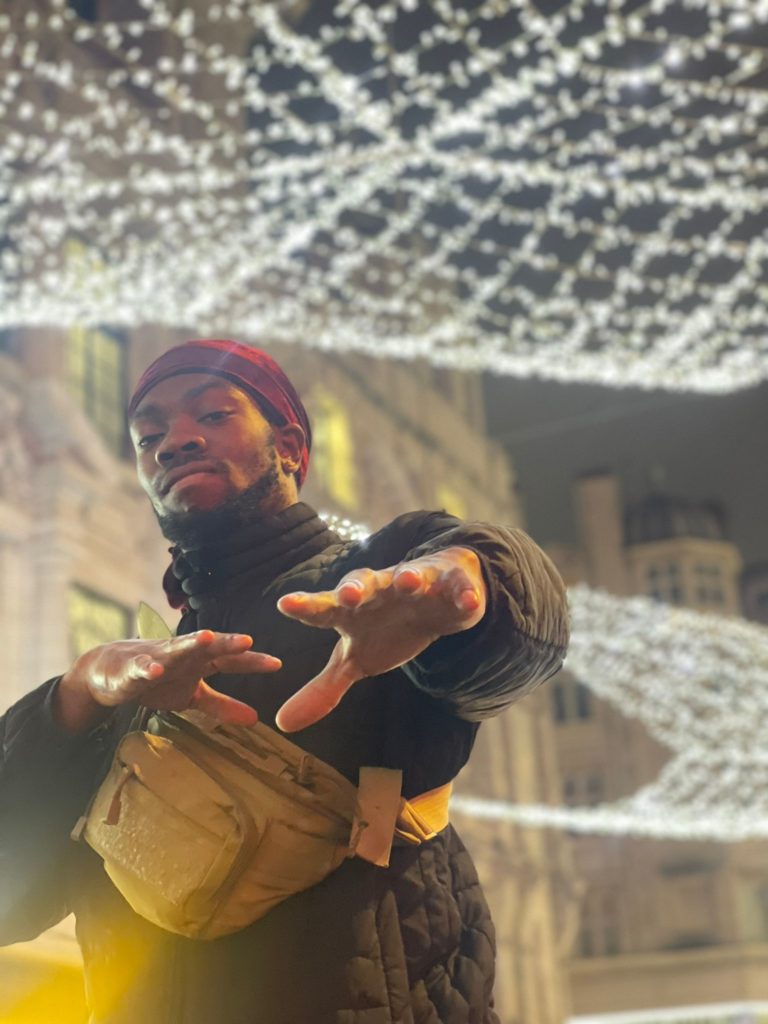